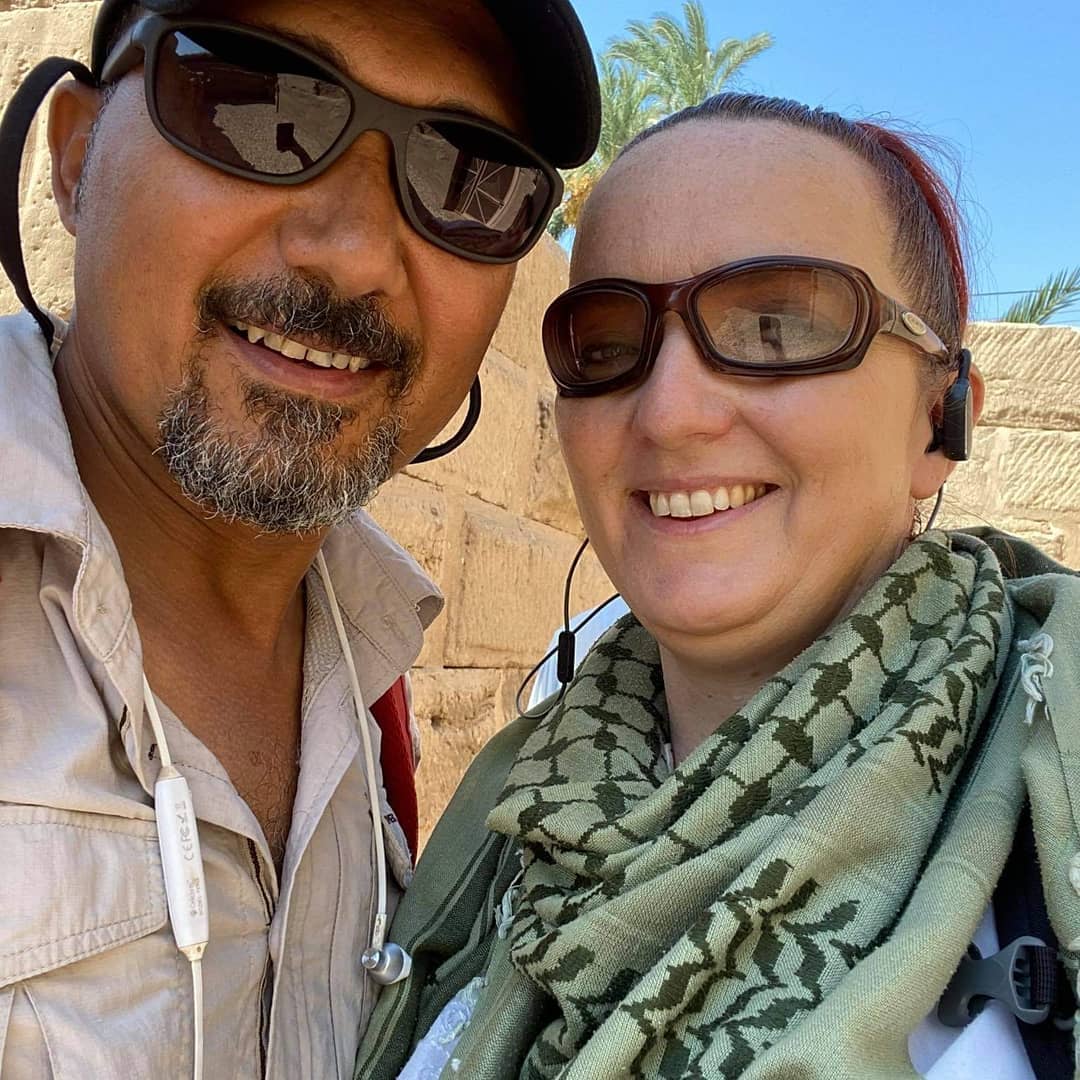 THEY are the husband and wife whose online adventures in Egypt have captured the hearts of hundreds of travellers.

But Lesley and Saffy Hamman’s love story is itself an unlikely adventure – a holiday romance that has stood the test of time.

As Lesley, 45, and originally from Shropshire’s Montford Bridge recovered from a terrifying accident, which you can read about in Part 1 of this interview here, fate took a hand again.

“It was a really weird coincidence,” Lesley admits. “I’d gone into the tack shop to buy some supplies and an older lady who was a friend of mine came in, all excited, saying: ‘I’m booking my holiday to Egypt tomorrow – why don’t you come with me?’

The pair booked to take a Nile cruise in 1998 but the tour operator cancelled all bookings after a terror attack at the Temple of Hatshepsut in Luxor in which 62 people were shot, mainly tourists.

“Undeterred, my friend said she was still going, and did I still want to go with her,” says Lesley. 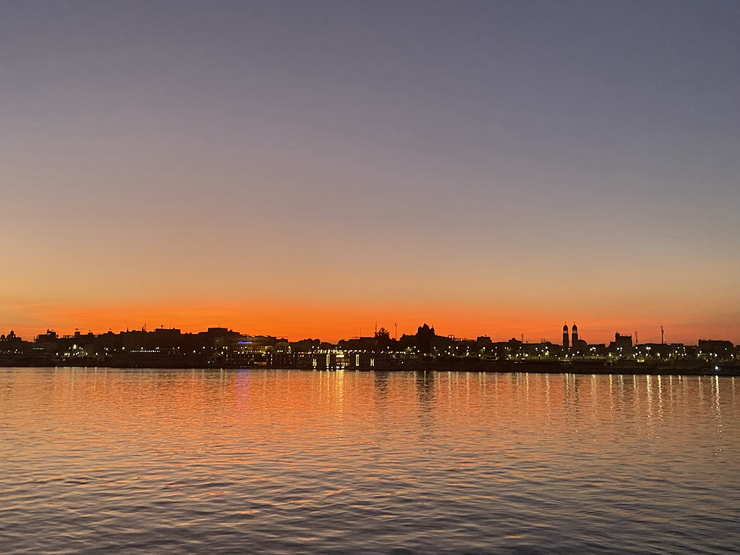 “In the UK there were problems at the time. Manchester had been bombed and the IRA was still quite active. I reasoned I could get killed in a city back home – but what were the chances of it happening twice in succession in Luxor?

“We booked again with a local Egyptian travel company and I did the cruise, where Saffy just happened to be the front office manager on the boat. When I got there, I was 21 and everyone else there was 60-plus so I ended up chatting with him a lot.

“At the end of the two weeks, he proposed. In hindsight it could have been a disaster. He proposed to me in April, I married him in July and I moved out to Egypt permanently in October. We’re still together 23 years later so something must have been OK.”

Lesley fought back to fitness by taking on a series of gruelling challenges, raising cash for the Animal Care in Egypt charity, which is UK-based but operates an animal hospital in Egypt. 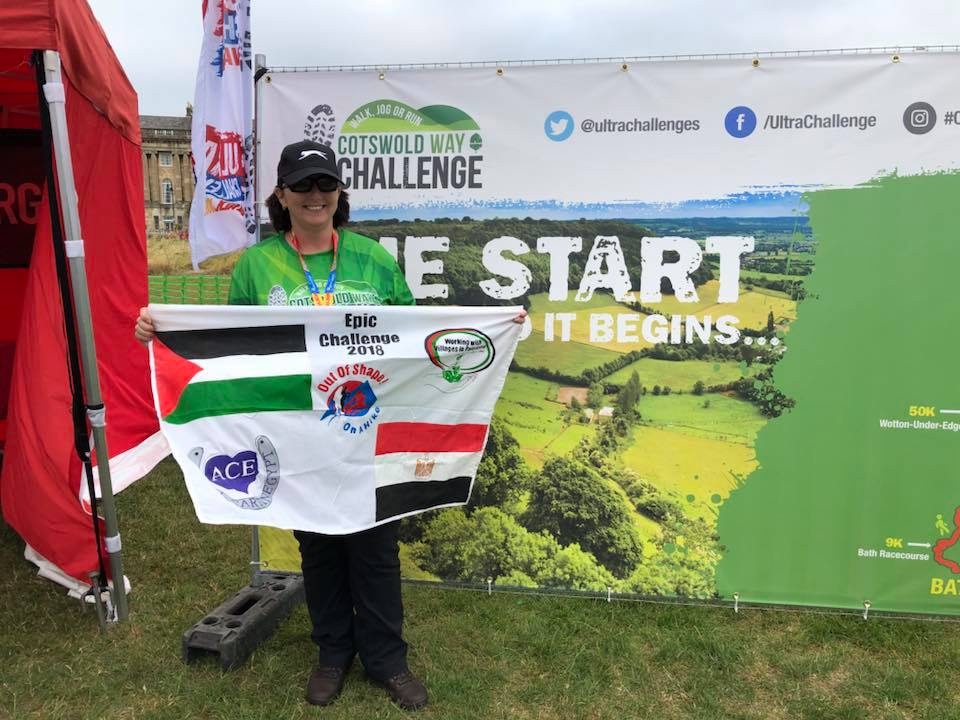 One of Lesley’s UK challenges

“I wanted to do something entirely out of my comfort zone because I’d put a lot of weight on while I was recuperating,” she says. “I’d lost my career, and had kids, and become a professional food eater, stuffing my face.

“I wanted to do something that would have people saying ‘She’ll never do that!’ So I signed up for the 24 Peaks Challenge, up and down 24 peaks in the Lake District in 24 hours.

“It was hell on earth but I loved it. I had a picture of the peaks tattooed on my arm afterwards. Since then I’ve kept pushing myself, doing ultra challenges of 50km to 100km in 24 hours. I’m doing one this weekend, walking from Luxor to Esna on Saturday October 9. I’ll be the first foreign woman to walk that distance on that route.” 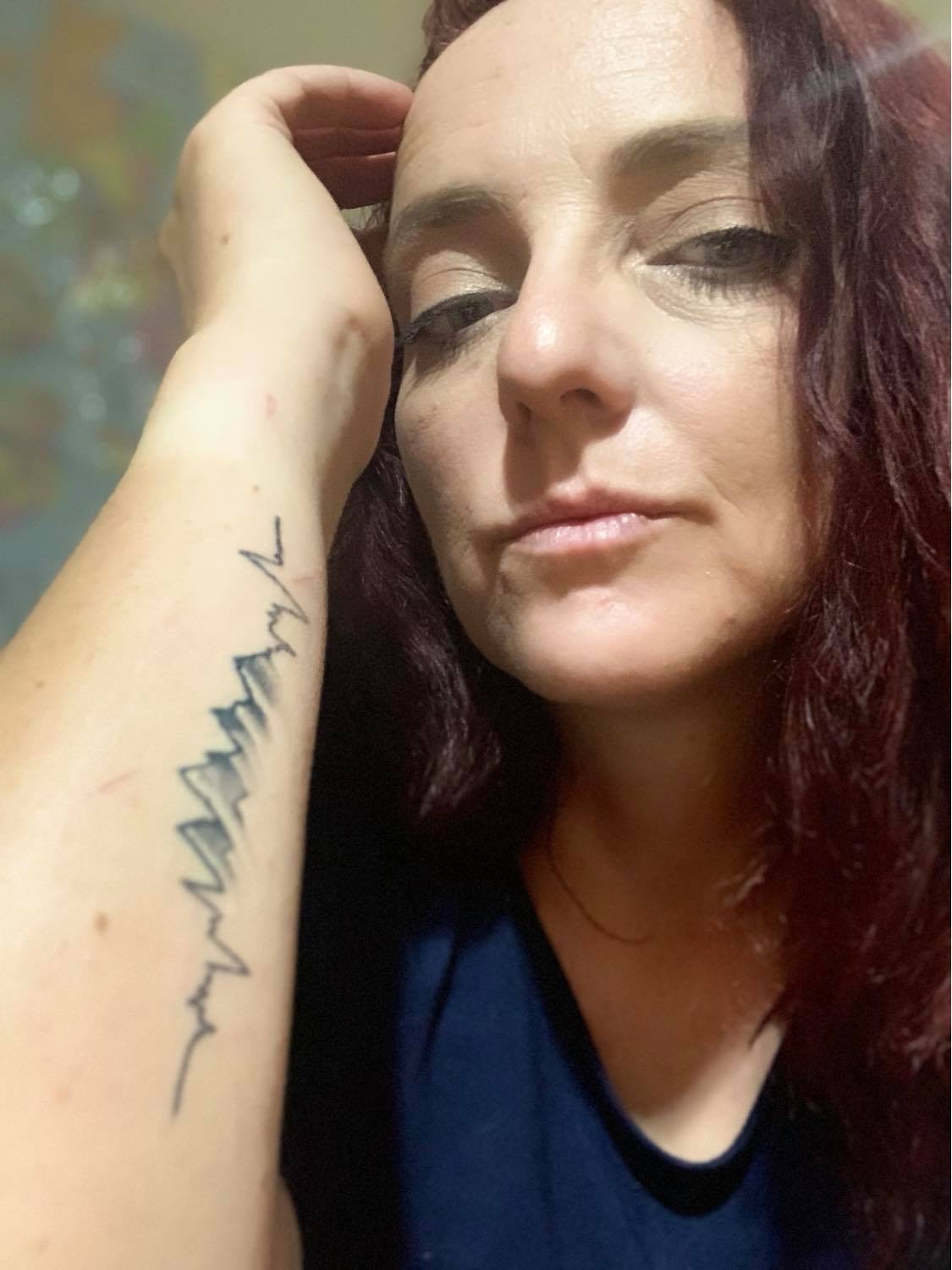 As well as both guiding, Lesley and Saffy run the Blue Lotus Farm, which sits on the opposite bank of the Nile to Luxor and the mountains that house many of the region’s antiquities. And it’s work that has spurred Lesley to start riding again.

The farmland had been in Saffy’s family for years. “Five and a half years ago someone invited me out riding and I realised I really missed it,” says Lesley. “So I started going regularly.

“Because of tradition here, it’s not the done thing for a woman to go out riding with a male counterpart you are not related to or married to. Saffy asked me ‘Are you serious about taking this on?’ And I was – I could not have been more certain.

“By this time I had found a horse named Gazelle, who was a completely broken soul; I’d found Sharifa; I accidentally found Raad – it means lightning in Egyptian – at the same stables. They were going to make him into a dancing horse. I wasn’t having that.

“Saffy said ‘Do you want to buy them?’ I did. I wanted to get them away from their situation. It kind of went on from there. 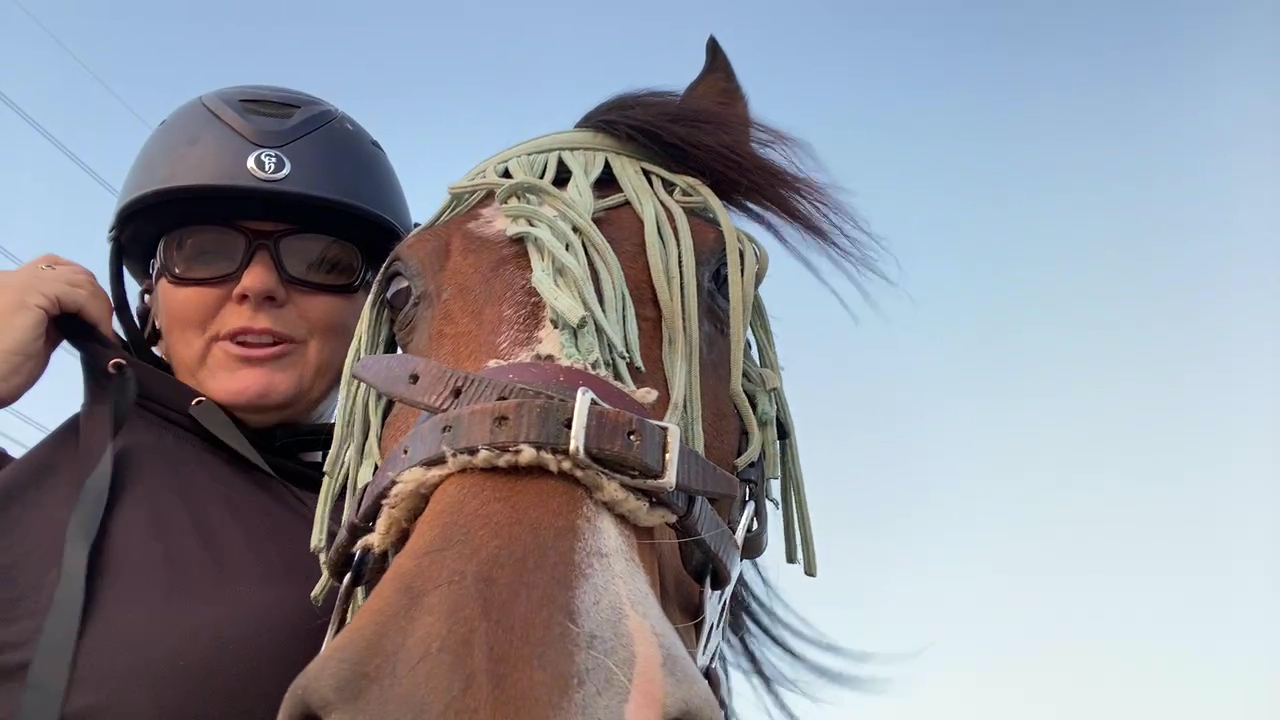 Lesley and Gazelle on a heygo trip

“Gazelle was completely misunderstood. He was neurotic. He could walk or gallop – the only two speeds he had – and he would try and hook me off in trees and lampposts and all sorts. I knew quite quickly that he was a one-person pony.

“Now, we have this relationship unlike any I have ever had with another horse. He’s the love of my life.”

The couple have three horses of their own, two rescue horses, four sheep, two goats, four cats, a baby rabbit named Thumper, 13 dairy cows and four calves, three of them named Steak, Chips and Yummy, although none will ever end up on a dinner plate.

It’s on Gazelle that Lesley rides out on many of her heygo tours, with hundreds of followers joining her in real time live streaming which users can access for free, although they are encouraged to leave tips – a godsend for many guides on the platform.

“I got into guiding by accident,” she confesses. “A friend of mine asked if I’d heard of heygo. Would I consider guiding with them because I’m good with people? When folk came over, Saffy and I would always take them out – he’d do the guiding and I’d provide the entertainment – and I got in touch. 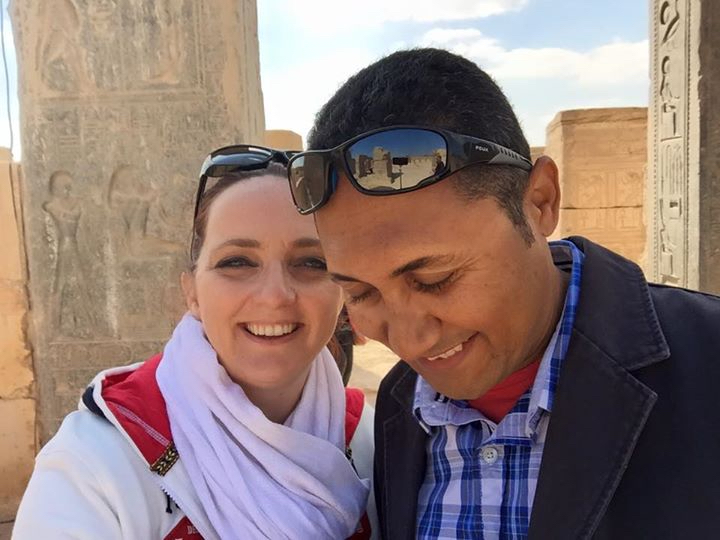 Lesley and Saffy out on tour

“We did a test tour and we haven’t looked back since.”

When Covid hit, the future looked bleak. The couple had invested all their money in the farm just to bring in an income. Friends were having to move out to the likes of Dubai and Kuwait to find work and for a while it looked as if the family would be split up.

“Without heygo we would have been in a really serious situation,” says Lesley now. “One of us would have had to go back to the UK to work there. So the remote guiding has been so important. It has meant we haven’t had to split up the family.”

Lesley and Saffy, 47, have two children – daughter Jenna is studying to go into medicine and son Amir has just gained aviation engineering qualifications on his way to fulfilling his dream of becoming a pilot. The pandemic has meant they haven’t seen each other face to face for nearly a year, but a family reunion is on the cards later this month.

Tips from the tours – 60% goes to the guides and 40% to heygo – can vary enormously from trip to trip but the couple always make sure some of their share reaches the local community who help them on their travels. 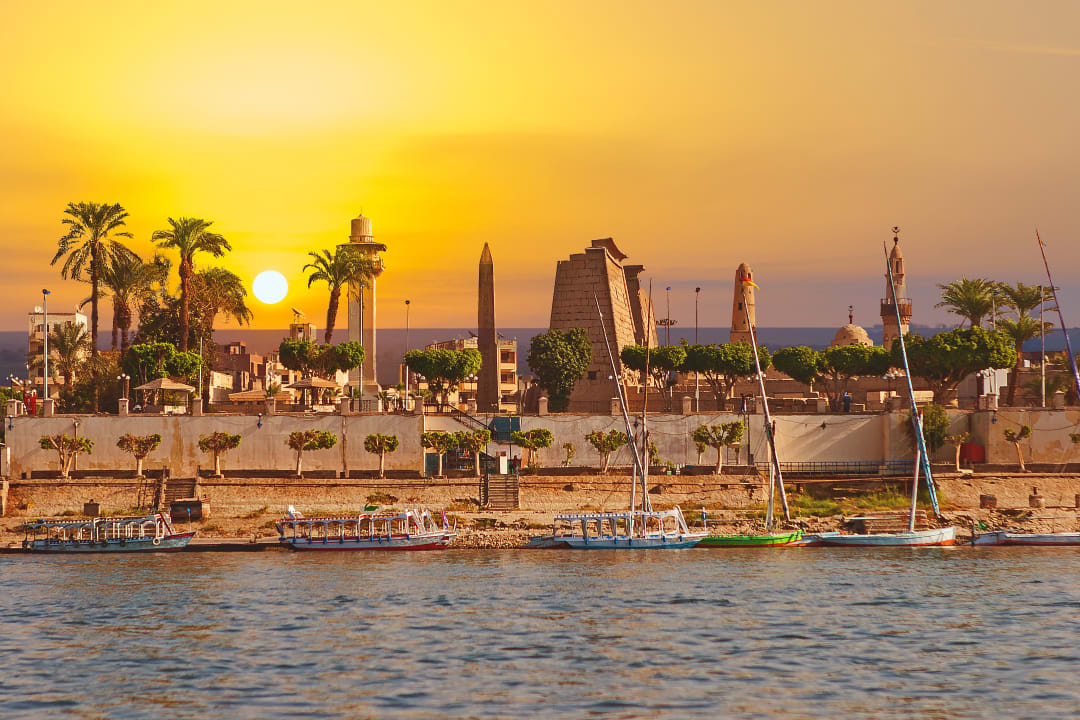 “Luxor is a touristic city. We have no industries, no factories. It’s all tourism,” explains Lesley. “When we do the tours we give back some of our tips to the kalesh drivers, the motorboat guys, and the temple guardians. We’ve been very lucky to have found heygo. Many people don’t have that opportunity.”

For the future, both Lesley and Saffy intend to continue virtual tours, even as face-to-face trips slowly start to return. She is also developing a clothing line in keeping with the message of body positivity she shares each week on her blog.

“When you go hiking its really difficult to find decent clothing if you are a larger size,” she explains. “Most of the big exercise and sports brands only go up to size 16 and that’s not fair.

“When I went up Snowdon, I was actually body shamed three-quarters of the way to the top just because I sat down where there was a bit of a gnarly bit. I was blowing out of my earholes – it’s a mountain, for goodness sake – and this guy came over. 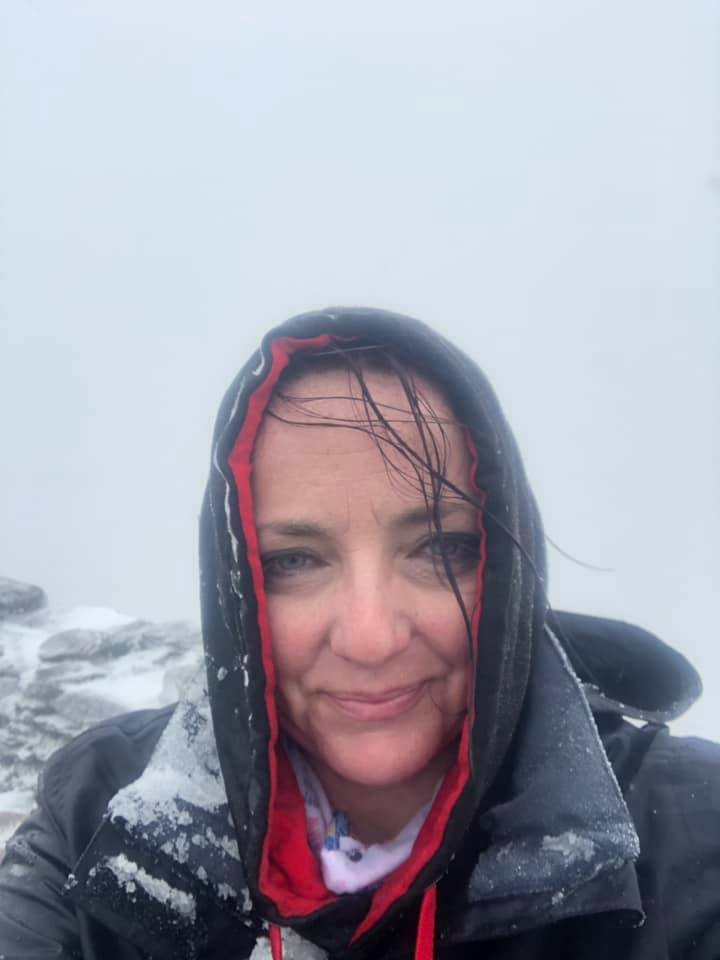 Lesley on top of Snowdon

“‘Oh, you’re doing ever so well,’ he said. ‘Don’t stop. You’ll be fine. You’ll get there’ There were 50-odd other people in exactly the same position as I was but because they weren’t as big as me, he thought he had to give me the encouragement.

It is, friends agree, typical of her – the Lesley Hammam way.

Read Part 1 of this interview to discover how a serious riding accident could have cost Lesley her life.

Lesley will be doing a free Q&A hour on her life and times with heygo virtual travellers at 7pm BST on Sunday October 10 – to join, and to see details of upcoming tours, see www.heygo.com.

Catch her blogs theadventurewithin.com and bluelotusegypt.com, and to sponsor her ultra challenge this weekend, step up to https://www.justgiving.com/fundraising/lesley-hammamtrek