Riding the world’s most exciting jet boat in New Zealand

THEY make no bones about it. This is, you are told, the most exciting jet boat ride in the world. No probably; no maybes; no equivocation.

And d’you know what? I think they may well be right. Actually, in the same spirit, scrap that. New Zealand’s Shotover Jet Boat IS a ride like no other.

And did I mention that it’s in water which can be as shallow as 10cm? Yep, less than three inches. Shorter than a Kit-Kat.

Sheila and I make the 10-minute drive from Kiwi adventure capital Queenstown to Arthurs Point on the Shotover River, where the jet boats – they have seven running in rotation – are based.

After a safety briefing, we’re suitably suited and booted in gear included in the ticket price. You’ll want to bring your own glasses or shades and a waterproof jacket. You WILL get wet.

Sheila and I, ready to board

If you’re riding in winter, then don’t forget warm clothes, a hat and gloves, even though the handrails on the jet boats are heated.

For safety reasons, you can’t use handheld personal cameras, and video cameras are not permitted aboard. All the trips are filmed, however, with video files for sale afterwards.

The beach where you embark

We walk down the beach to embark and then, with a grumble of those 350 Mercruiser V8 engines, we’re off. It seems pretty tame as we loop round a lagoon area for pictures to be taken.

But that’s just to lull you into a false sense of security. As we head up into the canyon, passing below the bridge high overhead, our pilot opens up the throttle. Within seconds, we’re breathless. 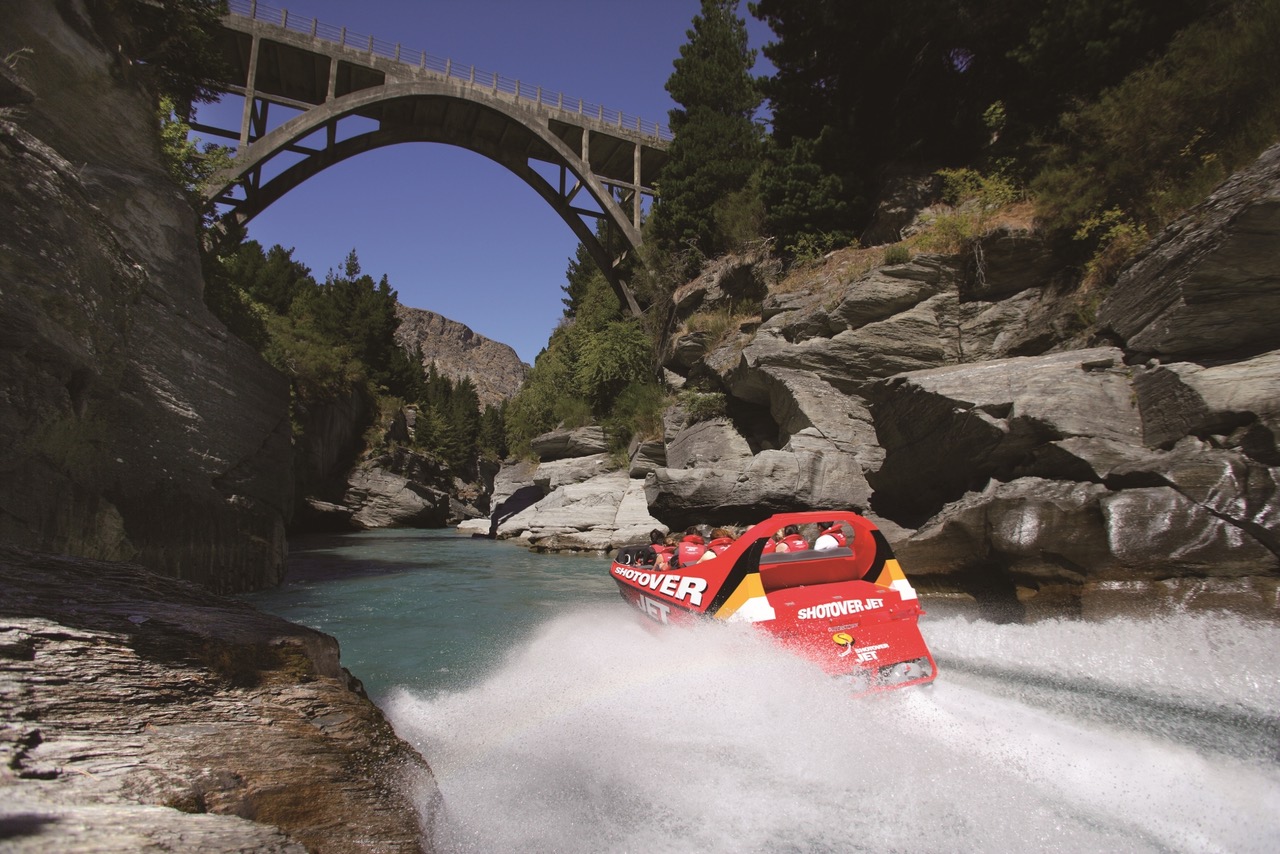 Heading out under the road bridge high above

The two Hamilton 212 Jet Units thrust 760 litres (that’s 167 gallons) of water per SECOND. The adrenaline starts to course as we’re pinned back in our seats and things get seriously wet and wild.

We rip through the white water, ride the rapids and squeak impossibly close to the rocky walls of the canyon. It’s exhilarating and soon we’re all whooping with unadulterated excitement.

Then, the piece de resistance. The pilot points his finger in the air and waves it in a circle. It’s the warning that we’re about to launch into a 360-degree high-speed spin.

We turn seemingly on a sixpence in one of the narrowest parts of the canyon. The back of the boat lifts high in the air and the G-forces are akin to the best theme park thrill rides.

In a spin – that’s us sitting right behind the pilot

It’s a manoeuvre that we get to savour several times during the 25-minute run and each time it’s as absurdly exciting as the first.

There’s but one tranquil interlude, when we briefly idle in a wider part of the Shotover canyons, making way for a second boat heading in the other direction.

Watching another boat heading back the other way

The canyons are a remarkable sight. Steep rock walls have been carved over thousands of years by billions of tonnes of fast-flowing river water from the heart of the Southern Alps.

Since it started up in 1965, Shotover Jet has operated on this section of the river exclusively, and is the only jet boat operator permitted in the canyons. 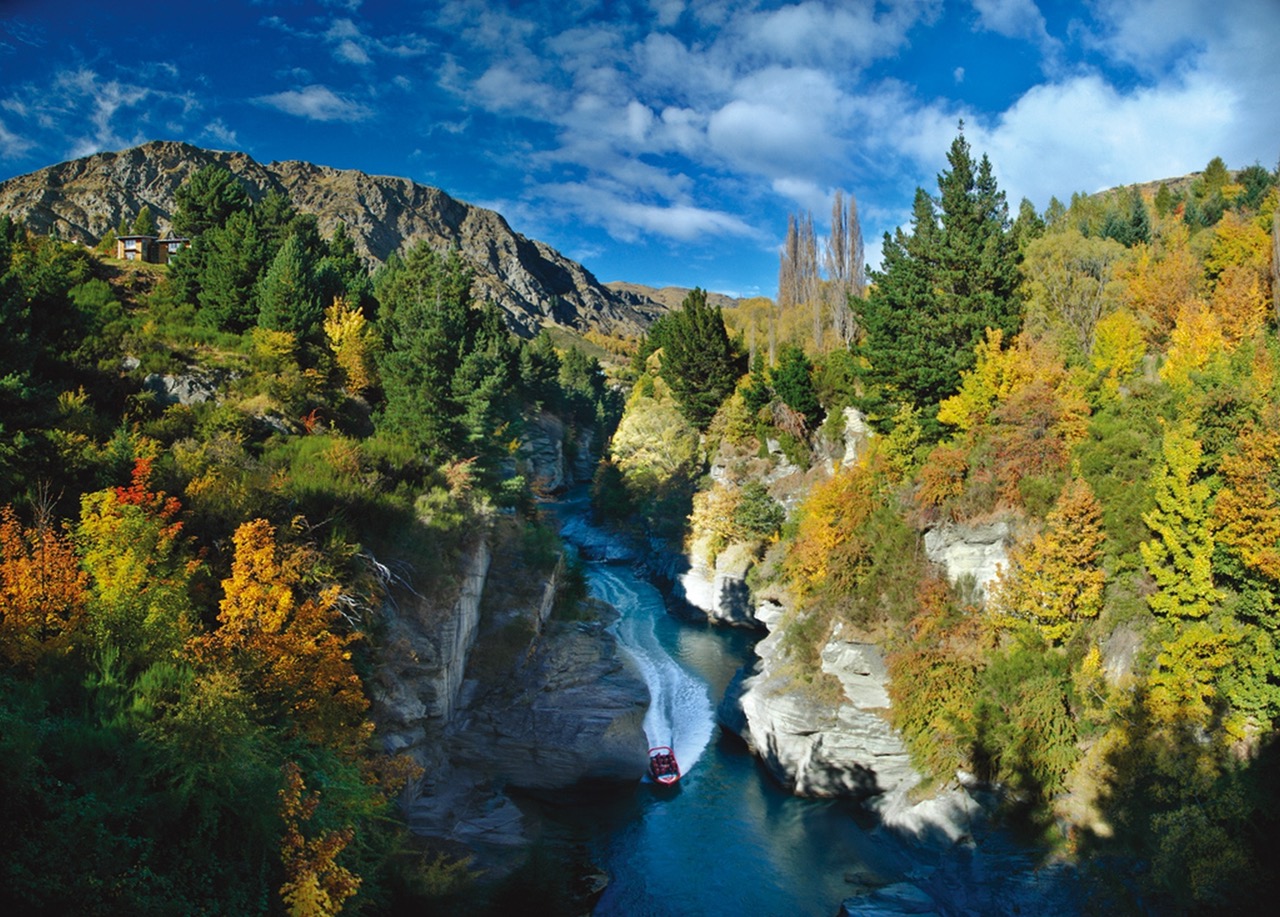 Sensational scenery if you can drag your eyes away

Little wonder that more than three million people have bought tickets to ride over the years, with a huge 98 per cent saying that the experience lived up to, or exceeded, expectations.

We count ourselves among the majority. All too soon, we’re heading back to the beach base for a final photograph and the return to terra firma. We want to step back straight on board.

It’s no surprise that Shotover enjoys a high number of repeat bookings. If you’re heading to New Zealand once travel returns to normal, book more than one ride in advance. You’ll be kicking yourself if you don’t.

Back in 1965, they started out with Jet 30 fibreglass boats that carried just five passengers. In 1993 Shotover Jet received both the New Zealand Tourism Supreme Award and the Best Visitor Attraction Award.

The current double-engined jet boats, which carry 14 passengers, were introduced in 2004 and many more awards have followed since then, making it an iconic ‘must do’ on any NZ adventure.

And here’s a quirky twist. It was on the beach where you embark that gold was discovered by Thomas Arthur way back in November 1862, sparking a gold rush second only to Klondike.

The gold and the business it brought helped build ports, roads and railways in the region, opening it up to the world. Today that trend continues … because the Shotover Jet ride is tourism gold.

Shotover Jet operates seven days a week, weather and river conditions permitting, with trips running every hour from 10am until 4pm. See www.shotoverjet.com for prices, booking, health and safety advice, including Covid updates.