Getting away with murder on Marple railway station

THEY’RE getting away with murder in Greater Manchester – thanks to a mystery worthy of an Agatha Christie whodunnit.

Marple is a small town on the outskirts of Stockport. It used to be in Cheshire until boundaries were redrawn in 1974, sparking such local dismay that protest marches took place.

I know it well because I spent my childhood years in the neighbouring village of High Lane, and spent many an hour in Marple Library, the closest to my home.

But its literary claim to fame is that the town is said to have inspired Christie to dream up Miss Jane Marple, the country village spinster sleuth who starred in 20 of her novels.

The author, locals will tell you, was travelling through the area early in the 20th century when her train was delayed at Marple Station and she subconsciously took note of the name.

Cue these wonderful Christie posters on the platform, greeting passengers to what would appear to be the home of one of the world’s great fictional characters.

There’s just one problem with the deductions. It isn’t quite true. Nor is it entirely false – Agatha herself would have been proud.

Miss Marple, second perhaps only to Hercule Poirot in the Christie canon, lives in the fictional village of St Mary Mead, generally thought to be in a picture postcard part of Surrey or Sussex.

Her first published appearance was in issue 350 of The Royal Magazine of December 1927 but she made her debut in a full-length novel in Christie’s The Murder at the Vicarage of 1930.

So what’s the real Marple connection?

Greenway, run by the National Trust

Christie was born in Torquay and lived in a splendid house called Greenway overlooking the River Dart. It is administered by the National Trust these days and makes a fascinating day out.

But she was a regular visitor to Cheshire from an early age because her sister Margaret married one James Watts of Abney Hall, Cheadle, around 10 miles away from Marple, in 1902.

Agatha was 12 years old at the time, and would go on to spend many of her childhood and adult years there. James encouraged her to write and Abney Hall is thought to be the inspiration for many of her whodunnit country house settings.

Abney Hall, Cheadle, as it is today

Marple Station sat on the Hope Valley line between Manchester and Sheffield, with access to the Midland Railway main line to St Pancras. Records show that in 1898 no fewer than 109 trains a day called at Marple.

So it’s reasonable to assume that Christie may have visited Marple Station. But when it comes to Jane Marple, that’s a red herring. There’s more to it than that.

In July 2015, the station celebrated its 150th anniversary (coincidentally, also the 125th anniversary of Agatha’s birth) and the author’s grandson, Mathew Prichard, was guest of honour.

He brought with him a letter written by his grandmother to a Miss Marple fan, explaining how she really came by the name.

“I expect you will be interested to learn that at the time I was writing The Thirteen Problems (starting with a series of six short stories for a magazine), I was staying with a sister of mine in Cheshire and we went to a sale at Marple Hall.

“The house alone, she said, was worth seeing, a beautiful old manor, belonging to the Bradshaws descended from Judge Bradshaw who sentenced Charles I.

“It was a very good sale with fine old Elizabethan and Jacobean furniture and at it I bought two Jacobean oak chairs which I still have.

“Wanting a name for my ‘old maid’ character I called her Jane Marple. So now you know the answer to your question!

Marple Hall was demolished in 1959 but by coincidence, I briefly went to Marple Hall Grammar School, – which later stood on the site – as a youngster before my family moved to another area of Cheshire. 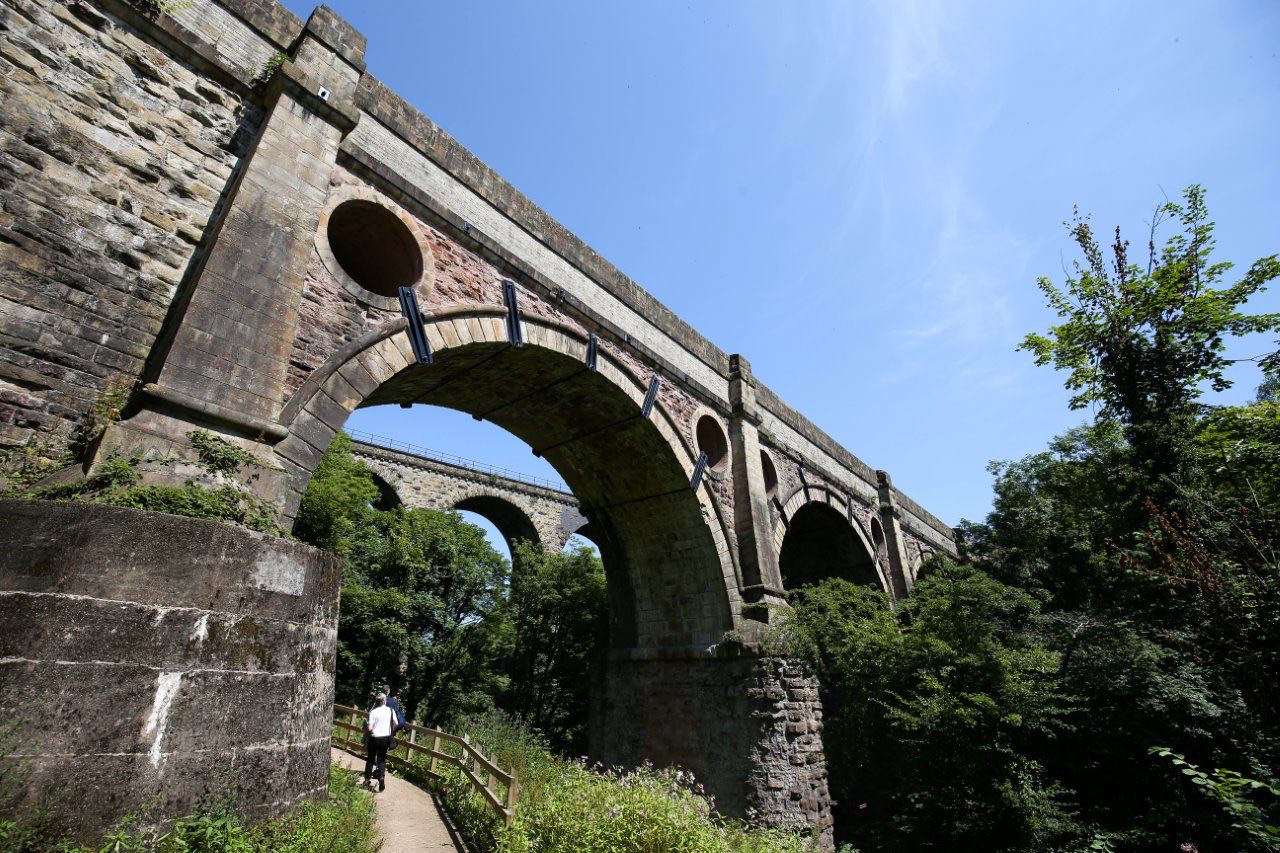 These days, Marple boasts a number of independent shops, a swimming pool, the Memorial Park, a village green, library and an impressive run of canal locks.

The flight of 16 locks is a spectacular sight – one of the steepest in Britain – with the countryside around Marple Aqueduct a 20-minute walk up the towpath to the top of the flight.

It attracts tourists from all over the world. Many of them arrive at Marple Station, where they might well spare a thought for Miss Marple as they alight from the train.

My thanks to Brian D Butler and his always excellent daily blog travelbetweenthepages.com for bringing the Marple mystery to my attention, sparking memories and prompting further investigation.