The top 20 travel musts based on bestselling books

WHILE we wait for travel to enter a new post-Covid chapter, there’s been a boom in reading, fuelled by the lockdowns.

So, as you start to make your plans for the future, why not draw up a bucketlist of must-see destinations you’ve read about?

A literary list of the most Instagrammable locations includes scenes inspired by Harry Potter, Lord of The Rings and many more.

Taking top spot is Piazza Navona and its Fountain of the Four Rivers in Rome, which features in Dan Brown’s bestseller Angels and Demons.

Although a huge tourist attraction in itself, of course, many visitors follow the footsteps of Robert Langdon and contribute to the fountain’s huge 395,507 Instagram hashtags and posts.

In 2008, the book was adapted into a movie, using Bernini’s famous fountain in the Piazza for the attempted drowning of a cardinal, further increasing its popularity with tourists.

There are many other Angels & Demons locations throughout Rome, but this is the one that appears to have captured the imagination of the movie fans.

A league table drawn up by online retailer OnBuy.com  found that the second most popular real-life book inspired location is Scotland’s Glencoe, with 384,369 Instagram hashtags.

Author J.K. Rowling’s books convinced thousands of Harry Potter fans to make the trip to see Hagrid’s Hut in Glencoe, making it one of the most visited novel spots!

It’s no longer there – the set was removed after filming, restoring the area to its natural beauty – but the backdrop is just the same as you saw it on the screen. 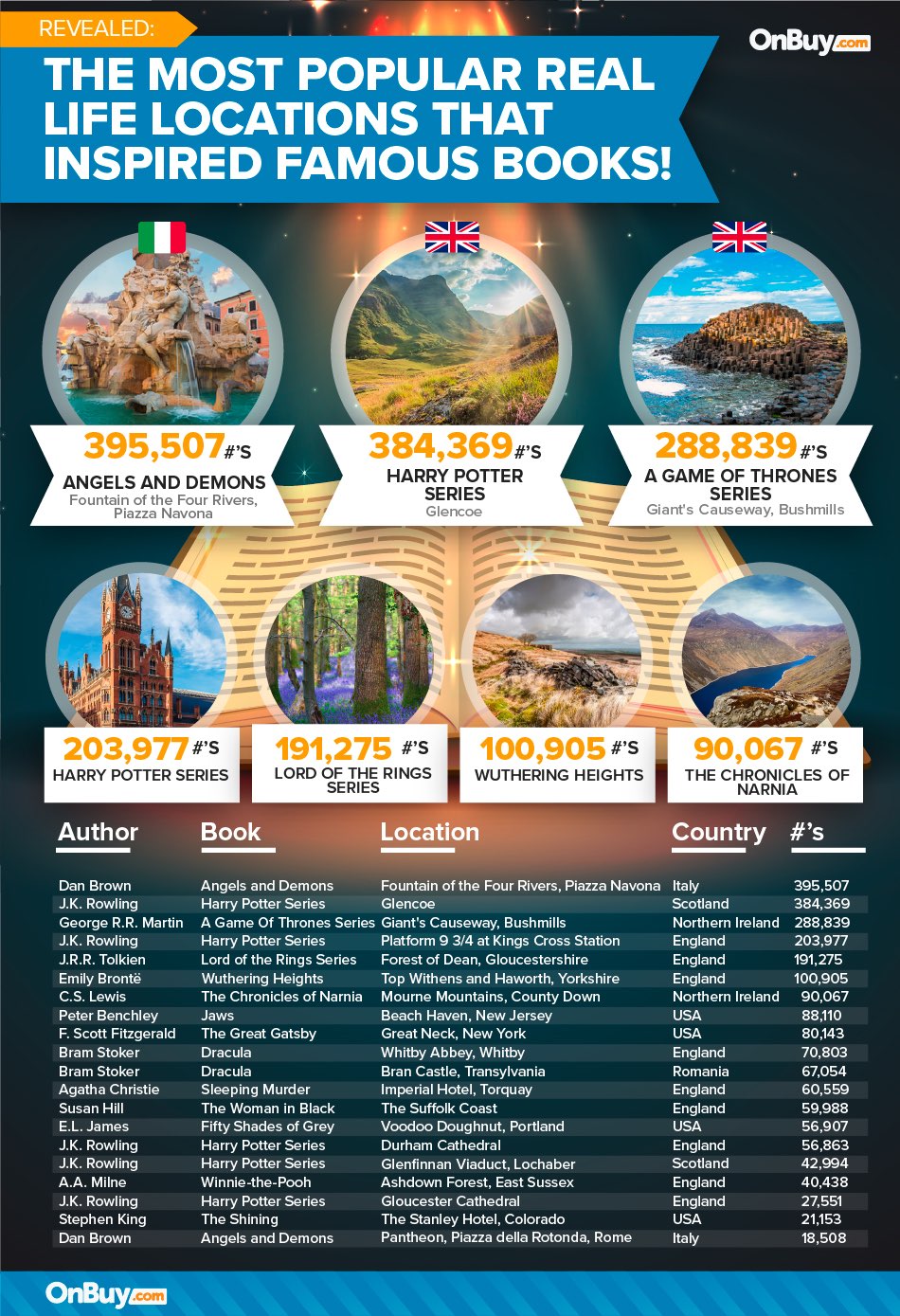 George R.R. Martin’s Song of Ice and Fire books, turned into the Game of Thrones TV series, were partly inspired by the Giant’s Causeway in Bushmills, Northern Ireland, placing it in third.

The world-famous stones have amassed a huge 288,839 hashtags on Instagram, and they’re certainly a spectacular sight.

Thanks to J.K. Rowling, Platform 9¾ at Kings Cross Station has a total of 203,977 Instagram hashtags, making it the fourth most popular book location, although it doesn’t really exist!

But a mock-up of the entrance to the famous train platform entices Harry Potter fans from across the globe as they begin their Hogwarts fantasy of becoming a witch or wizard at the London station.

The Forest of Dean in Gloucestershire (191,275 hashtags) and Top Whitens in Yorkshire (100,905 hashtags) place in fifth and sixth place, respectively, due to their features that inspired both the authors of Lord of the Rings and Wuthering Heights.

Next up, The Chronicles of Narnia by C.S. Lewis was inspired by the Mourne Mountains in Northern Ireland, and has a total of 90,067 Instagram hashtags.

Further afield, Jaws by Peter Benchley was inspired by Beach Haven in New Jersey, USA, and has a total of 88,110 Instagram hashtags.

At ninth place, The Great Gatsby by F. Scott Fitzgerald was inspired by Great Neck in New York, USA, and has a total of 80,143 Instagram hashtags.

Last, but not least – and certainly one to get your teeth in to – Bram Stoker’s Dracula was inspired by Whitby Abbey in North Yorkshire, and has a total of 70,803 Instagram hashtags.

There are more Harry Potter hotspots further down the list, including Durham Cathedral, the Glenfinnan Viaducts and Gloucester Cathedral.

Others getting an honourable mention include books by Stephen King, A A Milne, Susan Hill, CS Lewis, Emily Bronte, Agatha Christie and E L James, showing travel tastes comes in all shades.